Does David Brandt hold the secret for turning industrial agriculture from global-warming problem to carbon solution? 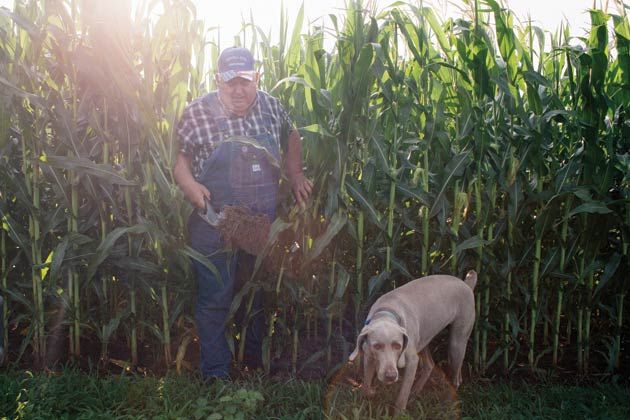 Photos by Tristan Spinski
CHATTING WITH DAVID BRANDT outside his barn on a sunny June morning, I wonder if he doesn't look too much like a farmer—what a casting director might call "too on the nose." He's a beefy man in bib overalls, a plaid shirt, and well-worn boots, with short, gray-streaked hair peeking out from a trucker hat over a round, unlined face ruddy from the sun.

Brandt farms 1,200 acres in the central Ohio village of Carroll, pop. 524. This is the domain of industrial-scale agriculture—a vast expanse of corn and soybean fields broken up only by the sprawl creeping in from Columbus. Brandt, 66, raised his kids on this farm after taking it over from his grandfather. Yet he sounds not so much like a subject of King Corn as, say, one of the organics geeks I work with on my own farm in North Carolina. In his g-droppin' Midwestern monotone, he's telling me about his cover crops—fall plantings that blanket the ground in winter and are allowed to rot in place come spring, a practice as eyebrow-raising in corn country as holding a naked yoga class in the pasture. The plot I can see looks just about identical to the carpet of corn that stretches from eastern Ohio to western Nebraska. But last winter it would have looked very different: While the neighbors' fields lay fallow, Brandt's teemed with a mix of as many as 14 different plant species. Click here to read more.

Posted by Terry Hankins, Goat Rancher Editor at 8:01 AM