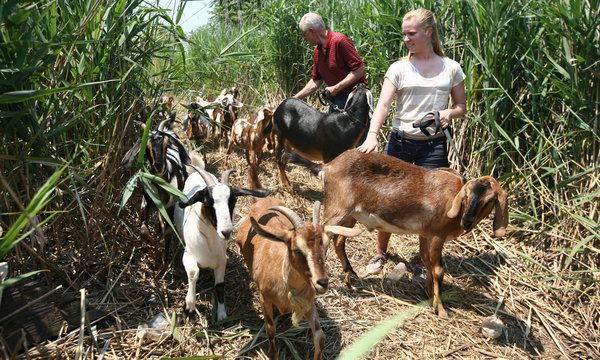 Ozier Muhammad/The New York Times
Larry Cihanek, his daughter Lauren, and some of the goats they have leased to the city to clear a stubborn kind of weed in what will soon be Freshkills Park.

Van Goat with Mr. Cihanek, who has provided 20 of the animals.
Known for their unending, indiscriminate appetites, the goats are being rented by the city for the next six weeks from a farmer in the Hudson Valley. Parks officials are counting on the goats to clear the phragmites across two acres of wetlands that will eventually be cultivated with native grasses like spartina and black needle rush. The hope is that the goats will weaken the phragmites, setting the stage for another series of assaults on their stubborn rhizomes — applying herbicide, scarifying the earth and laying down sand.
In the short term, the goats are part of an unusual experiment to eradicate the pesky reeds, which were introduced from Europe in the late 19th century and which, once rooted, are almost impossible to eliminate. They have fueled brush fires across the region and pushed out other species along the East Coast.
But the farm animals are also being tested for their lawn-mowing prowess, especially at Freshkills Park, which is in transition from its former life as the world’s largest landfill to its future one — as the largest park to be developed in New York City in more than a century.
“We want to introduce the idea of using goats to help in vegetation management,” Eloise L. Hirsh, the administrator of the park, said. “The sanitation department mows us once a year. But this is 2,200 acres. We need help.”
The goats are perhaps the most vivid example of the lengths to which the city is going to turn a symbol of environmental degradation into one of ecological redemption. As Freshkills Park is developed in phases over the next three decades, it will be a laboratory for green practices; there are plans for composting toilets, green roofs, rain gardens and a native seed farm.
The official opening of the park is two or three years off, though it is open periodically for tours. Three of the four giant mounds formed by garbage are now capped, and the parks department will soon solicit bids on the first stage of development — 21 acres with walking paths and a bird observation tower overlooking the wetlands. Already, the landscape looks impossibly bucolic, with dragonflies and swallows darting amid lanky grasses and the occasional tree.
The goats only add to the pastoral image. On Thursday, Beethoven, with long white ears and a black body, and Van Goat, sporting a black stripe down his chestnut back, were contentedly exploring their new territory, plunging their mouths into dense stands of phragmites. Others trotted down to the shore of Main Creek, a tributary of the Fresh Kill. (In yet another act of environmental rectitude, parks workers will soon arrange logs made of coconut fiber along the banks to attract mussels, which prevent erosion.)
“The first test was to see if they would eat the phragmites, and they’re eating it, so they passed,” said Terry Doss, an ecologist with Biohabitats, a company specializing in ecological restoration that is advising the parks department.
The city received a grant of $350,000 from the state for the wetlands project. (The cost of renting the goats from Larry Cihanek of Rhinebeck, N.Y., is $20,625 for the six weeks.) If the goats prove successful, Freshkills Park may one day have a permanent herd. “It’s exciting to be able to replace what would be a carbon-polluting mowing strategy with a more natural approach,” said Andrew Deer, a landscape architect for the parks department.
While goats have been deployed for phragmite duty elsewhere, some ecologists are skeptical.
“I’m not a big fan of goats,” said Bernd Blossey, an associate professor of natural resources at Cornell University. “I understand why people are desperate to try them. But they will eat the leaves but not the stems, and they also don’t like getting their hooves wet.”
Professor Blossey is experimenting with moth caterpillars, which can weaken phragmites. In the 1990s, he was successful in unleashing leaf beetles against another plant invader, purple loosestrife, which is not nearly the scourge it once was.
But as the goats made their debut this week at Freshkills Park, any such doubts were pushed to the background. Ms. Hirsh was already looking ahead to a day when goats not only keep phragmites in check, but also put Staten Island on the artisanal food map. “We would like to have a cheese manufacturer here,” she said. “I know there will be lots of skepticism. But it would be a pretty eloquent statement about how you really can restore land that was formerly very damaged.”

Posted by Terry Hankins, Goat Rancher Editor at 10:45 AM