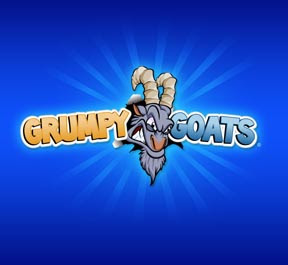 The Facebook game Grumpy Goats debuted on Thursday. This fun and addictive game pits virtuous goats against devious sheep. Run as an app on the Facebook platform, the game allows users to play with friends, and to use both virtual and earned currencies--such as coins and badges--to unlock new levels and items, and also to earn bragging rights.
"When Verge Games launched our first online game Fashion Girl, we achieved instant success. As social media and online gaming continue to rise in popularity, we felt launching a game for Facebook users was the best next step for our company," said Robert Regular, President at Verge Games. "The whole Verge team is extremely excited to release Grumpy Goats and we want to encourage gamers of all stripes to 'Get Grumpy!'"
When developing Grumpy Goats, Verge focused on bringing the game to life with colorful, engaging animation, challenging physics-based fortress demolition, and lots of replay value. It requires logic, skill, and determination to eliminate the enemy sheep and move through each of the 48 levels.
Facebook gamers have grown to an estimated 320 million monthly users, creating a powerful medium to reach an engaged audience. According to a recent eMarketer social gaming study, there will be 73.6 million social gamers by 2013, with 44.8 percent of those players being social network users.
Grumpy Goats is now available on Facebook and is free to play.
For more information on Grumpy Goats, please visit: http://www.grumpygoats.com

Posted by Terry Hankins, Goat Rancher Editor at 7:51 AM