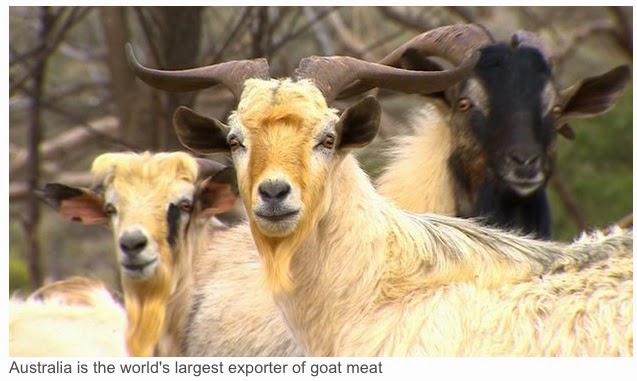 You can read much about goat meat at http://munchingmeadows.com.   In an article entitled  “What Kind of Goat Are You Getting?,” it is mentioned that about 50% of the goat meat in the U.S. is imported from Australia, and the source is that country’s huge feral goat herds. As the goat industry expert Dr. Frank Pinkerton says, “Australian production of goats for export is primarily based on ‘catch, kill, store and ship’ operations featuring very low-cost feral goat harvest.”
The article notes that the quality of that product has to be variable, since in this kind of feral “catch and kill” system, you inevitably end up harvesting animals who are older or who are bucks (or both!), and thus the meat will be tough, or have that strong “bucky” flavor to it. The author says: "We suspect this is one reason we see so many different descriptions online of what goat meat supposedly tastes like. When half the goat meat in this country comes from feral animals harvested like this, it’s no wonder. Can you imagine if 50% of the beef that Americans ate came from feral cattle herds, captured and slaughtered in the same random way?"
Recently, there was a BBC News story on Australia’s feral goat industry, and the video shows lots of large, older feral goats in these capture pens — goats who are clearly not kids and yet are being harvested for the export meat market. The Munching Meadows website noted that Australia’s own livestock industry marketing board acknowledges problems with the “inconsistent supply and quality” of their goat meat … and interestingly enough, the BBC reporter mentions the exact same thing in his report.
Here is the link to the BBC report:
http://munchingmeadows.com/bbc-news-report-on-australias-feral-goat-industry/