The Nebraska Sheep and Goat Producers Association and Nebraska Extension are hosting a lambing kidding school, Saturday March 2nd, 10am at the Custer County Fairgrounds. The school consists of 6 presentations and a hands-on tour.
Presentations include:
“How to keep ewes and does healthy through disease control and treatment” presented via webinar by Dr. Brian Vander Ley, DVM and Veterinary Epidemiologist at the UNL Great Plains Veterinary Educational Center
“Economical Feeding programs for the doe” presented by Dr. Steve Hart, Goat Extension Specialist with Langston University, Tulsa, OK
“Movi bacteria and how to prevent it in sheep herds” presented by Laura McHale, Wildlife Biologist with South Dakota State University
“Economical Feeding programs for the ewe” presented by Dr. Ivan Rush, sheep producer, Scottsbluff, NE
“Good Sheep Management Practices” presented by David Ollila, Sheep Specialist, SDSU Rapid City, SD
“Treating Chilled Newborns” presented by Dr. Regina Rankin, DVM, and Vicki Milner, Crawford Companion Animal Clinic
The Tour includes: body condition of ewes and does, care of the young “bum” lamb and goat, when and how to assist difficult births, and other health and management practices.
Join us Saturday, March 2nd, 10am at the Custer County Fairgrounds, 44100 Memorial Dr. Broken Bow, NE. The Cost is $25 for non-members, $20 for members, and $10 for students. Handouts and Lunch Included. To register email ne.sheep.goat@gmail.com or Call Melissa Nicholson at 308-386-8378 by February 27th.

From Mount Vernon to Monticello, many of the key conservation practices that USDA recommends producers use on their farms have roots with our “founding farmers,” from presidents like George Washington, Thomas Jefferson, and Abraham Lincoln, to innovators like Ben Franklin and George Washington Carver.
The political and thought leaders of the young nation knew how important agriculture and – more importantly, sustainable agriculture – was to America’s success. They wrote about how to grow enough food to feed a booming population, how to boost soil health, and how to farm in a way that prevents soil erosion. 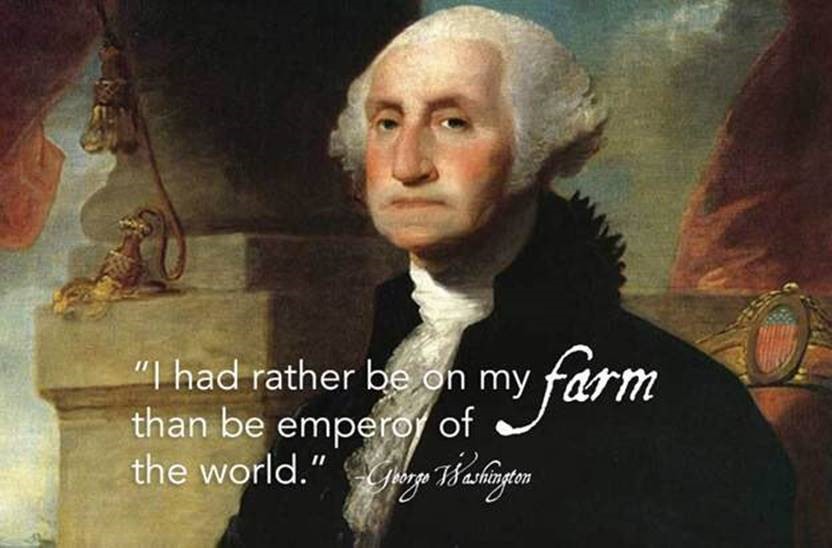 A Farmer First
Historian Garry Wills said: “Farming technique was Washington’s principal intellectual discipline, his favorite topic of conversation, the focus of his private correspondence.”
Actually, when British troops closed in on New York City in 1776, then General George Washington temporarily put aside his battle plans to pen a letter to the steward of Mount Vernon about his farm.
The “First” Crop Experiment Stations
Washington studied and implemented ways to improve his farming methods at Mount Vernon, his 8,000-acre homestead and network of farms in Virginia near Washington, D.C. He took meticulous notes, and he experimented quite often. As did Thomas Jefferson, the nation’s third president, who was known for hundreds of varieties of fruits, vegetables, and herbs grown at Monticello located near Charlottesville, Virginia.
With everything so unstudied – soils, weather, crops, pests, weeds, and farming methods – the founding farmers ran unofficial demonstration farms. Benjamin Franklin, although known for his inventions, bought a New Jersey farm where he retired, managing it like a “miniature experiment station, carrying on projects in drainage, in crop rotation, and especially in the utilization of the newer grasses and liming and fertilization,” wrote historian Earle D. Ross.
And of Washington, historian Albert Bushnell Hart wrote: “He established what I believe to have been the first agricultural experiment station in American history.” 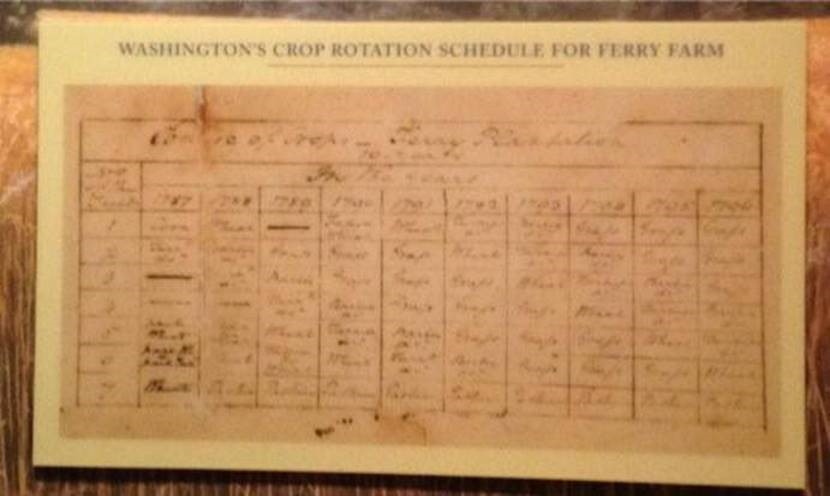 Early Conservationists
Unknowingly, these founding farmers were among the earliest proponents of soil health in America, as they used crop rotations and organic fertilizers to boost soil health and production. Actually, many of the farming methods implemented on their farms align with conservation practices that USDA recommends to farmers today.
Ten years after the republic was born, Washington began to reconfigure fields on his farms, changing from a one-crop tobacco system to a seven-crop system growing wheat, corn, and legumes. Wheat was the principal cash crop; corn fed his livestock, and legumes fed the soil.
America’s fifth president, James Monroe, was also a farmer, who left tobacco for a multi-crop system of grains. Historian Harlow Giles Unger wrote: “To keep his fields fertile, he rotated his crops, setting some fields aside for a season of clover…to revitalize the soil.”
Not Going Out of Style
Conservation crop rotation is one of the 100-plus conservation practices that USDA’s Natural Resources Conservation Service helps farmers plan and implement because of its many benefits to soil and production.
Similarly, contour farming and cover crops, which were found on farms on the early days of our republic, are still used today.
While traveling in France, Jefferson saw that farmers planted to the contour of the land rather than in straight lines. He wrote: “Our country is hilly, and we have been in the habit of ploughing in straight rows… and our soil was rapidly running into rivers.” He used contour farming at Monticello, putting him ahead of his contemporaries.
And Washington’s cropping systems included cover crops to prevent erosion and improve soil. Mount Vernon researcher Jinny Fox wrote: “He rotates crops – first he tries buckwheat and later switches to clover.”
Help for Farmers
Raised on a farm in Indiana and Illinois, who would know better than farmer-turned-president, Abraham Lincoln, about the importance of the government supporting agriculture. Lincoln advocated for the creation of USDA and signed the legislation that created it. 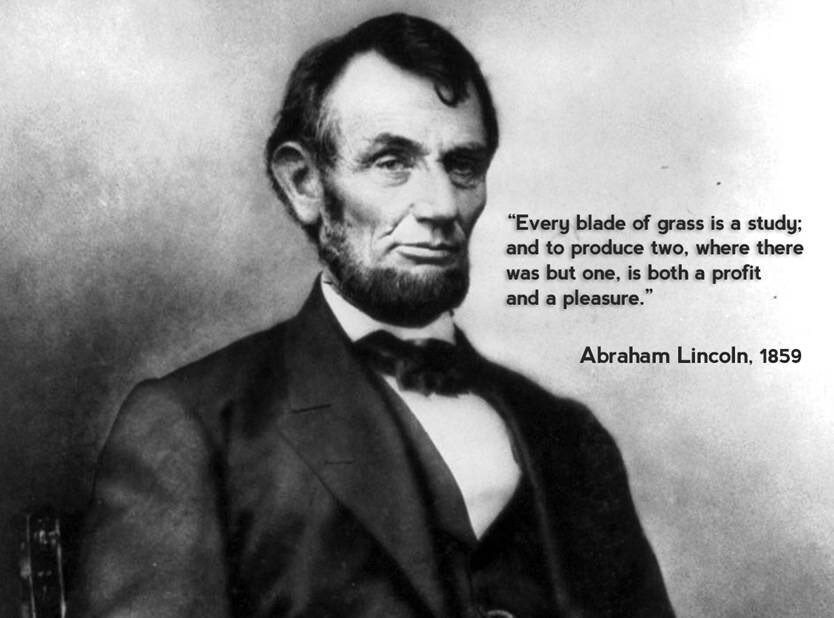 More than 150 years later, USDA offers a variety of risk management, disaster, loan, and conservation programs to help agricultural producers build resiliency and weather ups and downs in the market.
For more information on conservation practices – including conservation crop rotation, contour farming, and cover crops – as well as other USDA programs and services, contact your nearest USDA service center.
For more information on the founding farmers, visit the Mount Vernon website, the essay “The Founders, Farms and Facts,” and the book “Founding Gardeners.”
Justin Fritscher is a communications coordinator serving USDA’s Farm Service Agency, Natural Resources Conservation Service, and Risk Management Agency. He can be reached at justin.fritscher@wdc.usda.gov.

Posted by Terry Hankins, Goat Rancher Editor at 7:18 AM No comments:


In the latest episode of our ATTRA: Voices from the Field podcast, Nina Prater, a Soil 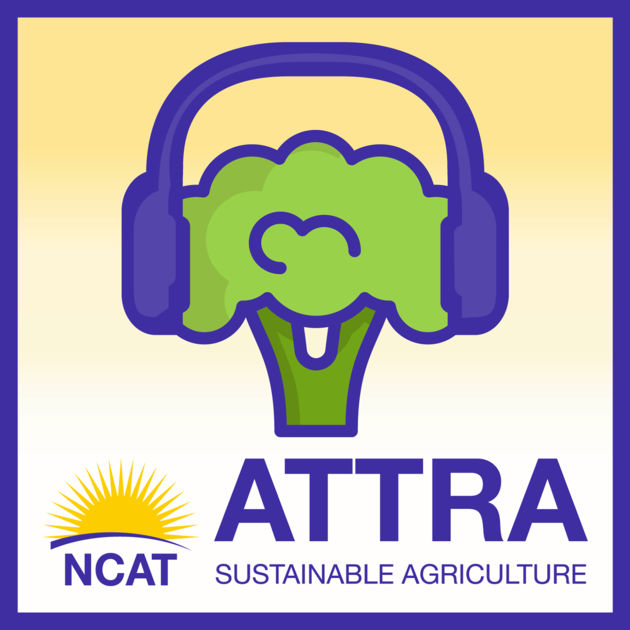 Specialist with NCAT’s ATTRA – National Sustainable Agriculture Information Service – at NCAT’s Southeast Regional Office in Fayetteville, Arkansas, sits down with Dr. Buz Kloot of the University of South Carolina.
They talk about a new composting system developed by Dr. David Johnson and Hui-Chen Su Johnson, dubbed the Johnson-Su Composting Bioreactor, which allows for beneficial-fungal growth. The conversation also includes fungi-to-bacteria ratios as a soil health indicator, the five “Soil Health Principles,” and how soil health practices can help farmers achieve greater financial freedom.
You can download the free podcast here and find it on the ATTRA website at
www.attra.ncat.org

You can also receive personalized advice and assistance about a host of sustainable agriculture issues by contacting our hotline, 800-346-9140, or email askanag@ncat.org.


Since 1976, the National Center for Appropriate Technology (NCAT) has been helping people by championing small-scale, local and sustainable solutions to reduce poverty, promote healthy communities and protect natural resources. More information about its programs and services is available at www.ncat.org or by calling 1-800-ASK-NCAT.
Posted by Terry Hankins, Goat Rancher Editor at 7:33 AM No comments: