Posted by Terry Hankins, Goat Rancher Editor at 9:32 AM No comments:

Washington, DC (August 26, 2021) – The U.S. Department of Agriculture (USDA) and its subagency, the Animal and Plant Health Inspection Service (APHIS), continue to violate federal law in their efforts to mandate “radio frequency identification” (RFID) eartags on livestock. The New Civil Liberties Alliance, a nonpartisan, nonprofit civil rights group, has filed an opening brief in the U.S. Court of Appeals for the Tenth Circuit over these agencies’ violation of the Federal Advisory Committee Act (FACA). The brief asks the Court to declare that USDA and APHIS established and utilized the “Cattle Traceability Working Group” (CTWG) and “Producer Traceability Council” (PTC) in violation of FACA.

In 2017, USDA began efforts to eliminate the use of most of the tried-and-true traceability and identification techniques approved previously as being acceptable for the interstate movement of livestock. In particular, USDA and APHIS concluded that the livestock industry should phase out the use of metal eartags, brands, backtags, and similar low-cost forms of identification, and convert to the exclusive use of expensive RFID eartags, with such a mandate to become effective as of January 1, 2023. These agencies arranged for the creation of the CTWG—and later the PTC—to assist them with that transition effort. FACA, adopted by Congress to further the goals of transparency and fairness, requires any such advisory committees “established” or “utilized” by a federal agency to comply with a wide range of procedural requirements, such as having balanced viewpoints and keeping certain records and making them publicly available.

On May 13, 2021, District Judge Freudenthal erred by ruling in favor of USDA and APHIS and dismissing R-CALF’s FACA claims. NCLA also believes the district court abused its discretion in applying a Local Rule to deny our clients’ repeated requests for discovery. NCLA has requested that the Tenth Circuit enter judgment in favor of R-CALF USA and the four independent ranchers, Donna and Tracy Hunt and Kenny and Roxy Fox, on their claims that the CTWG and PTC are federal advisory committees covered by FACA. To deter future FACA abuse, NCLA also seeks an order from the Tenth Circuit prohibiting the agencies from using any of the work product generated by the CTWG and PTC in future endeavors to force RFID requirements on livestock producers.

“USDA and APHIS are well aware that the livestock industry opposes their efforts to mandate the use of high-cost RFID eartags. They created the CTWG and PTC as part of their strategy to circumvent that opposition and to make their astroturf efforts appear to be grassroots. Those efforts violated FACA, and the agencies should be held accountable. We are confident that the Tenth Circuit Court of Appeals will recognize these agencies’ actions for what they were, enjoin them from engaging in such behavior, and prohibit them from using the unlawfully obtained committee work product in their future regulatory activities.”

NCLA is a nonpartisan, nonprofit civil rights group founded by prominent legal scholar Philip Hamburger to protect constitutional freedoms from violations by the Administrative State. NCLA’s public-interest litigation and other pro bono advocacy strive to tame the unlawful power of state and federal agencies and to foster a new civil liberties movement that will help restore Americans’ fundamental rights.

Posted by Terry Hankins, Goat Rancher Editor at 9:39 AM No comments: 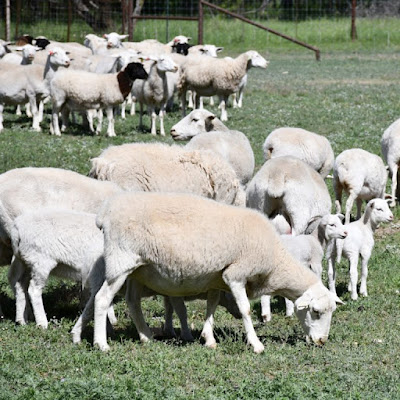 The Texas A&M AgriLife Extension Service has announced the dates and theme for the seventh annual Texas Sheep and Goat Expo. The event is set for Aug. 20-21 at the 1st Community Federal Credit Union Spur Arena at the San Angelo Fairgrounds.

“Feeding and Nutrition” will be the theme of this year’s event, with a focus on sheep and goat market prices.

“We are excited to be planning the return of the industry’s preeminent expo event,” said Robert Pritz, event coordinator and AgriLife Extension regional program leader in San Angelo. “We were thrilled by how well last year’s event went after we had to go to an online, virtual format for the first time due to COVID-19 and social distancing guidelines, but we’re thrilled about the prospect of getting to meet face-to-face once more and fellowshipping with each other.”

The event draws producers from across Texas, out of state, and as far away as Australia. It is the largest event of its type in Texas and one of the largest sheep and goat industry educational programs in the world, said Pritz.

The expo will feature guest speakers, educational seminars and numerous live sessions for participants to choose from. The event covers a range of industry topics, including addressing the concerns and challenges facing today’s producer in light of recent events, as well as the exciting changes happening in the industry involving technological advances and new services.

The 48th Sheep and Goat Field Day will also be held in conjunction with the expo. The event will be held the morning of Aug. 20 at the Texas A&M AgriLife Research and Extension Center in San Angelo. The free field day allows participants to hear from experts and observe firsthand the center’s sheep and goats, livestock guardian dog program and the recently expanded services of the Bill Sims wool lab.

For more information, contact Pritz at 325-653-4576 or check the official website, https://agrilife.org/agrilifesheepandgoat/, which will be updated as more plans are made.

Posted by Terry Hankins, Goat Rancher Editor at 10:29 AM No comments:

Posted by Terry Hankins, Goat Rancher Editor at 7:12 AM No comments: