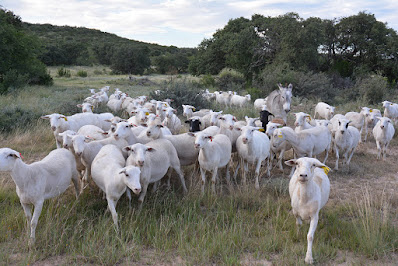 Lambing and kidding season has begun as the market for goat and lamb continues to ride a wave of high prices due to steady demand and limited supplies. (Texas A&M AgriLife photo)

“The lamb and goat markets are in another world as it relates to market conditions most Texas ag producers have been dealing with,” he said. “The market for Texas lambs and goats is diverse, resilient and growing. It avoided supply chain bottleneck issues other livestock markets dealt with, and I think the COVID restrictions kept the regular consumers home, which means more family functions to eat lamb and goat meat.”

Texas producers continue to command top prices as they supply a niche market around the U.S., Redden said.

In January, the base price for 60-pound lightweight slaughter lambs was $3 per pound, up 70 cents per pound from this time last year, he said. Those lambs are selling $1 per pound over the five-year rolling average.

Overall, consumer demand for lamb has expanded in recent years. But Redden said Texas lambs have commanded premium prices through the non-traditional market compared to the traditional market for restaurants or retail sale.

The traditional feeder market, which prefers larger framed, wool-type lambs fed to 140-180 pounds, and mimics the beef industry as far as processing and logistics, is not as common in Texas as it used to be, he said. The vast majority of Texas lambs are smaller-framed hair sheep that typically weigh 40-80 pounds – and go to ethnic consumers.

Prices for Texas lambs are driven primarily by the demand from nontraditional ethnic consumers, who are concentrated in major populations centers around the state and nation, Redden said.

Lambs are shipped live to the markets where they are sold directly to consumers or harvested by ethnic processors and distributed to ethnic grocers and butcher shops. These non-traditional markets demand smaller, leaner lambs and pay a premium for them.

“The market has been strong for some time now, but prices continue to trend upward,” he said.

Lamb production is limited in the U.S. because very few regions have climates and production conditions that sheep perform well in compared to other livestock.

A significant piece of the traditional U.S. lamb market is supplied by imports and they are one-third to half the cost of domestic lamb, but imported lamb do not appear to have as large an effect on the ethnic market supplied by Texas lambs and goats, he said.

Many consumers want lambs at 40-60 pounds, but producers are realizing better margins at 60-80 pounds, Redden said. These market conditions factor into maintaining and inflating strong prices as buyers jockey for specific weight and class lambs.

“It’s a specialty market, and it’s become harder and harder for supplies to meet demand,” he said. “The prices reflect that.”

“The kid goat market is even brighter than lambs,” he said. “The goat market has been on fire the last several years and getting better and better. Producers don’t understand it, but they’re just riding the wave as far as it will go.”

Unlike Texas’ lamb market, goats have never been part of the traditional meat production apparatus, Reid said. There are no big processing plants or packers, and production feeds non-traditional, primarily ethnic demand.

From January and February, goat prices fluctuated between $3.50-$3.80 per pound compared to a five-year average of $2.50-$2.75 for the same time of season. January-March is typically when prices are the best. Kidding season is just now getting started and most market goats are sold in the summer and fall.

Goats are lighter, slower-growing animals compared to sheep, Redden said. Market kid goats tend to be lighter than lambs – typically averaging 35-65 pounds – but are achieving comparable prices per head due to higher prices. Some goats have brought over $4 per pound at market.

“There was one down week last year when buyers were worried about the COVID-19 pandemic, but as soon as the orders kept coming in, prices took off and have continued to climb,” Redden said. “There just aren’t enough goats to meet demands.”

Redden said it was noteworthy that even the cull nanny market was very strong, meaning buyers are willing to pay top dollar for less desirable goats. They were selling at $2.20 per pound in February, 85 cents per pound above the five-year February average for 100-pound nanny goats of $1.35 per pound.

Redden said goats, like Texas lambs, are in high demand in major population centers across the state and country. While lambs are more adaptable to other production conditions, western parts of Texas are ideal for goat production due to browse requirements and low internal parasite load.

About 40% of U.S. goat production is located in West Central and West Texas, Redden said. About 30% of goats consumed in the U.S. comes from imports. Australia has been a major player in the import market, but their goats are primarily feral herds, and they aren’t able to increase production to meet the growing demand. As such, imports have very little impact on domestic goat prices.

“You see people with a few hobby goats here and there, but the major producers who are experienced with the infrastructure and know-how to handle a commercial goat herd are generally located in Texas,” he said. “There’s interest in goat production because prices have been so good, but they are a lot of work, and I don’t predict large increases in goat production outside the state.”

Posted by Terry Hankins, Goat Rancher Editor at 5:53 AM No comments:

By Brianna Randall, USDA NRCS Working Lands for Wildlife
Water can make or break a ranch in America’s dry western states. This is especially true for families like the Blairs who graze livestock on rangelands in South Dakota.

“I want to keep all of the rain that falls on this ranch so we can grow as much grass as possible,” said Ed Blair. Now 68, Ed co-manages Blair Brothers Angus Ranch with his brother, son, and nephew.

They run cattle on 40,000 acres of deeded and leased pastures where the Black Hills meet the prairie. Ed’s grandfather and his siblings homesteaded south of Sturgis in 1906, and his father moved to their current “home ranch” in 1954. The family expanded by buy-ing the Two Top Ranch near Belle Fourche in 2014.

This region receives an average of 14 inches of rain per year, although  average” is the key word. “Some years we have to grow grass on four to six inches of rain. It’s not ideal, but I can manage that as long as I’ve got a consistent source of water,” said Ed.

These conservation practices have allowed the Blairs to grow more grass and double their stocking rate in 30 years. Rotating livestock quickly through pastures allows the plants to rest and grow taller. This creates more profitable working lands.

“Ranching is a business as well as a lifestyle,” said Tanse Herrmann, NRCS District Conservationist in Sturgis, who has worked with the Blairs since 2003. “At NRCS, we want to make sure this multi-generational family stays on their land doing what they do best: raising cows and managing natural resources.”

Based on the success on the ranch, Ed’s son, Chad Blair, “hit the ground running with rotational grazing” when he and his wife, Mary, began managing the Two Top Ranch in 2014.

“These ranchlands provide some of the best sage grouse habitat in the state,” said Gottlob.
Two Top is one of five adjoining ranches that have participated in the Sage Grouse Initia-tive. Along with a host of partners including the Bird Conservancy of the Rockies, US Fish and Wildlife Service Partners Program, Northern Great Plains Joint Venture, South Dakota Game, Fish, and Parks, and Pheasants Forever, ranchers here have conserved over 105 square-miles of working grazing lands for wildlife.

Chad and Mary have three young children who help out on the ranch and enjoy seeing wildlife near their home. “Our kids are learning the value of not overusing the grass and making it sustainable for the future, just like I learned from my dad and uncle,” said Chad.

The family’s focus on sustaining natural resources earned the Blair Brothers Angus Ranch the South Dakota Leopold Conservation Award and the Public Land Council’s Sagebrush Steppe Stewardship Award. The Blairs were also listed on the 2020 BEEF Top 100 Seedstock list.
“You can help the environment and yourself by doing these programs,” said Chad.

Or as his father, Ed, likes to say: “We take care of the grass, and it takes care of us.”

Brianna Randall is a freelance writer based in Missoula, Montana.

Posted by Terry Hankins, Goat Rancher Editor at 6:09 AM No comments: 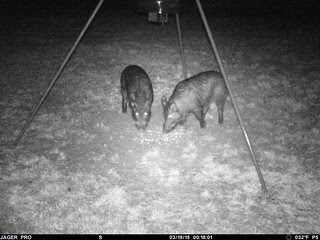 U of A System Division of Agriculture

LITTLE ROCK — Landowners in the Buffalo River Watershed are eligible to receive assistance from the U.S. Department of Agriculture aimed at eradicating feral hog populations in the area.

Additionally, as part of the Buffalo River Watershed Enhancement Project, funding for conservation assistance is also currently available to landowners as well as agricultural producers in the watershed who are interested in implementing conservation practices to help maintain and improve water quality.

John Pennington, extension water quality educator for the University of Arkansas System Division of Agriculture, said there will be multiple sign-up opportunities for this special assistance over the next five years with up to $400,000 additional conservation funding available for qualifying landowners annually.

“The importance is that not only can these forms of conservation assistance help protect water quality in the watershed, but they can also improve farm profitability and habitat for native wildlife,” Pennington said. “Also of importance, this opportunity does not come around every day, or even very often.”

The Cooperative Extensions Service, part of the Division of Agriculture, is helping to provide site visits, outreach and information within the project area, as well as providing feral hog control informational resources.

The funded conservation practices are intended to increase farm efficiency and reduce nutrients, sediment, and bacteria from moving off the landscape and into tributaries, and align with the recommendations from the Buffalo River Watershed Management Plan. Some examples of supported conservation practices include brush management, prescribed burning and pasture fencing.

Other agencies and organizations on the Arkansas Feral Hog Eradication Task Force are available to help. Residents who prefer to learn how to trap hogs themselves using new technologies, and are willing to host a field demonstration, or would like to pick up an Arkansas Feral Hog Handbook, contact your local county extension office (Uaex.uada.edu).

Other steps to help in the eradication of feral hogs and improvement of water quality are to report sightings and kills of feral hogs using the Feral Hog Reporting Survey 123 app from the Arkansas Feral Hog Eradication Task Force, available at  https://www.agriculture.arkansas.gov/arkansas-department-of-agriculture-services/feral-hog/. Learn more about methods for effective control at https://www.uaex.uada.edu/environment-nature/wildlife/feral-hogs.aspx.