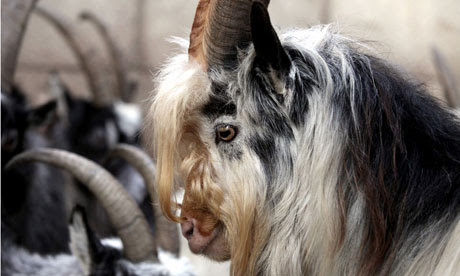 Northumberland's wild goats prepare for 'tagging' at Yeavering Farm. Photograph: Mike Urwin/Newcastle University
One of the UK's oldest and most elusive herd of wild animals is to be tracked by satellite after surviving in little-known circumstances for at least 5000 years.
Electronic collars have been fitted to six goats from a dynasty that has roamed a remote area of the Cheviot hills on Northumberland's border with Scotland since escaping from farms in Neolithic times.
Self-sufficient and shy, the striking, horned animals have been left alone until recent times, when the spread of hill-farming and conservation areas has finally led to confrontations in their moorland fastness.
"They are beginning to come into conflict with the rest of the world," said Dr Richard Bevan, a biologist from Newcastle university, who has been following the goats and carrying out the tagging before the winter moves in. "We need to find out, at last, where they go and what they do, to sort out areas of potential trouble."
With snow forecast this week, stalking has intensified around Yeavering Bell in the fells above Wooler, an Iron Age hillfort whose name – middle English for "goat hill" – is evidence of the herd's antiquity. The outcrop is one of their regular grazing sites, but details of their ranging into wilder areas further inland remain very hazy.
Sensors on the collars, linked to GPS monitoring, should show both the herd's movements and places where problems with farmers or conservationists might arise. The immediate area contains several sites of special scientific interest which would be vulnerable to over-grazing, particularly if a bad winter drove the animals down from the highest ground as happened last year.
"A local farmer told me: so long as they stay right up in the hills, there's not a problem," said Bevan, who is carrying out the project with a colleague, Dr Pete Garson, and zoology students Aimee Palmer and Scott Barnes. "The goats have no legal protection, so if landowners decide that they don't want them, then they are within their rights to remove them. This poses a real threat to this small, genetically unique population. At the moment, the goats are barely tolerated."
The animals are classified as "British primitive goats" and form the most northerly of a small number of similar groups in England and Wales. These include herds in Snowdonia and the Black Mountains and on Lundy island, as well as smaller groups in Somerset and on the Isle of Wight. Scotland has a larger population, most of them seeking obscurity deep in the Highlands.
Bevan said: "The aim of our project is to understand exactly how far the goats roam and how they use the local landscape, as well as recording when, where and how long they spend eating so we can advise on any future management. The collars allow us to build up a very accurate picture of their behaviour and should give an idea how much they are to blame for damage to crops or trees and how we might stop that.
"Ultimately, the aim is to find a way for nature, man and goat to live together happily."
Posted by Terry Hankins, Goat Rancher Editor at 5:25 PM